TALES OF THE COCKTAIL 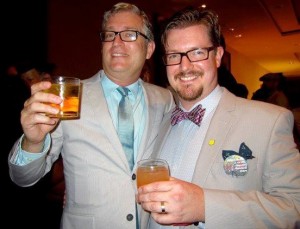 I had the spirit-soaked pleasure of attending an unconventional convention that just celebrated ten years in New Orleans. The birthplace of all good things and a few things even better, The Big Easy hosts a raucous spectacle every July in the stickiest, funkiest heat called “Tales of the Cocktail.” Thousands of enthusiastic revelers take over the Hotel Monteleone and the surrounding area to celebrate all things boozy. The crowd consists of bartenders, writers, distillers, brand representatives, artists, afficionados… every kind of boozehound you can imagine, and several more you can’t. At right, that’s me with bud Chris Bostick, General Manager of The Varnish in Los Angeles, just before he and the rest of the crew won the Spirited Award for Best American Bar. Not too shabby.

The events range from elaborate sprawling spectacles hosted by the world’s biggest brands (with budgets to match), small private parties and product-launch tastings, concerts, competitions, and seminars. Those seminars will get as cocktail-geeky as you want, and I savored every minute of subjects such as Stephen Crane and the history of the Luau restaurant in Beverly Hills as presented by Martin Cate of Smuggler’s Cove or the history of drinking in Panama presented by cocktail historian David Wondrich and tiki guru Jeff “Beachbum” Berry. It was a kick to sit outside the pop-up shop run by Octavia Books and sign copies of my book for a handful of attendees and chat about what they like to make at home.

The previously-clandestine “Pig & Punch” hosted by The Bon Vivants made its official coming-out this year, and for my money, it was the best party there. Nine whole pigs, rotisserie barbecued and pulled to smoky perfection, six trash cans full of punch, a brass band, and impromptu soccer games with some neighborhood kids made for a little slice of magic.

The week-long party caps off with the annual Spirited Awards, honoring the best in the business as determined by a panel of respected peers. My little pocket book was nominated for “Best New Cocktail Book” alongside the best, including: gaz regan‘s “Annual Manual for Bartenders,” Brad Thomas Parsons‘ “Bitters,” and the shoe-in winner, Jim Meehan‘s “PDT Cocktail Book.” Believe me, just being nominated was more than I ever expected, and all the recognition I need!

As mind-spinning as the official events were, some of my favorite memories were the moments between the big events:

So what’s the takeaway from Tales of the Cocktail for the home enthusiast? The popularity and visibility of this new “Golden Age” of cocktailing we find ourselves enjoying doesn’t just benefit bars in the big metros anymore. Previously hard-to-find products like imported liqueurs, fancy bitters, and craft spirits are becoming easier to find across the country, making it convenient for home bartenders to try their hand at a wider range of drinks and to have more fun discovering new favorites.

If you’re curious, there’s a recap video showing what it was all about here – and of course, all are welcome to attend. Check out the official site and come on down for the party!

p.s. It wasn’t all fun and games, and I would be remiss if I didn’t mention that on the opening night of Tales, the bartending community lost someone special: Jenna Bredesen, who worked with Audrey Saunders at Pegu Club in New York and as a cocktail ambassador and educator for David Kaplan & Alex Day’s Proprietors LLC project in Mumbai, India. Just 27 years old, she passed away in an unfortunate accident away from the official events and her death cast a sobering, uneasy shadow over the festivities for those who knew. A tragic reminder to look after each other and ourselves. Donations in her memory can be made to Oceana.org.

This site uses Akismet to reduce spam. Learn how your comment data is processed.