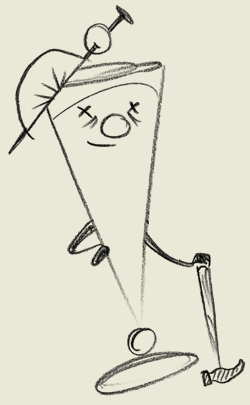 With the benefit of hindsight, it’s generally acknowledged the ’70s and ’80s were the Dark Times of 20th-century drinkmaking. Maybe cocktail culture just wasn’t high on the priority list: America had just emerged from a decade of radical upheaval and change: the civil rights movement, the Vietnam war, the sexual revolution, the emergence of the psychedelic youth culture, and the best blues, soul, rock, pop, and country music ever created. The ’70s presented a new set of challenges: ending a war, firing a president, finding equality for gays and lesbians, running out of gas, and dealing with out-of-control pollution. The general question seemed to be, “so… now what?” The general answer (in the face of all this heaviness) seemed to be, “Have a Good Time.”

Drinks in the ’70s were all about stupid simplicity: Margarita (José Cuervo & Sour Mix), Rum & Coke, Screwdriver (vodka & orange juice). People didn’t go to bars for a culinary experience – they went to bars to get laid. Drinks functioned as alcohol-delivery systems to loosen libidos and, maybe, indicators of what lay ahead in the night: Margarita drinkers were partiers, Screwdriver drinkers couldn’t handle strong feelings (or flavors), Rusty Nail drinkers had fingers that smelled like an ashtray.

The original Harvey Wallbanger recipe, as promoted by Galliano, was a softer Screwdriver (that was already disappointingly limp): one ounce of vodka, six ounces of orange juice (most likely pasteurized, from concentrate) and a half-ounce float of Galliano, the herbal Italian vanilla-and-anise liqueur. Not a very interesting mix – but the seed of an idea is there.

San Diego bartender Eric Johnson is too young to have suffered the drinks of the ’70s, but he has an appreciation for “The Me Decade.” He designed the bar menu at Sycamore Den, a new hot spot in Normal Heights that celebrates the glorious awfulness of those days with diagonal wood paneling, a sunken “conversation pit,” macramé, and swag lamps. I’m convinced there’s a hidden “Dad’s rec room” somewhere on the premises with shag carpeting, a hi-fi, a bong, and a stack of vintage Swank magazines. The drinks at Sycamore Den are contemporary, though (you didn’t see too much mezcal, Suze, absinthe, or Aperol on ’70s menus)… with one exception: the Hardly Wallbanger. Johnson was curious about the original Harvey Wallbanger and couldn’t figure out what accounted for its popularity. Marketing can only go so far, you know. Johnson told me, “I definitely was loving Galliano and wanted to showcase the liqueur over the neutral spirit, vodka. I added vanilla to satisfy my sweet tooth and was thinking ‘Orange Julius’ after a couple attempts. I had the staff test it out and all were nodding or banging their heads in approval!” The Hardly Wallbanger chucks what’s bad about the original and enhances everything good – keeping its creamy orange-and-vanilla lightness, adding a subtle tartness, and shining a light on the recently-reformulated Galliano’s intriguing herbal blend.

Keep an eye on what oranges you use in this – Valencias will be sweeter, so you’ll probably want to dial down the simple syrup to a quarter-ounce. If you’re using the more common Navel oranges, stick with a half-ounce. Use real vanilla extract, not imitation vanilla flavor – even though it’s just a few drops, you’ll know the difference.

In a shaker about a third-full with ice cubes, add:

Shake briefly to blend and chill, then strain into a Collins glass filled about two-thirds of the way up with cracked ice. Top with:

Add additional ice as needed. Stir lightly to blend and garnish with an orange wheel and cherry pierced on a cocktail pick. Optionally, serve with a straw.