Making great drinks at home is fun, cheaper than going out, and easier than you might think. I’ve distilled twenty years of home-bartending experience along with the advice of some of the country’s best professional bartenders to create my book “Home Bar Basics (and Not-So-Basics),” a pocket-sized Cocktails 101 guide. This companion website expands beyond the content of the book with additional recipes and tips, instructional videos, product reviews, and more.

In this section, I’ll cover The Basics: twelve drinks that form the core of a home bar menu. Master these and you’ll be ready for the more advanced recipes in The Not-So-Basics.

I recommend building this set of basic tools and booze as you go along, rather than buying them all at once. Start with what you need for one drink and go from there. 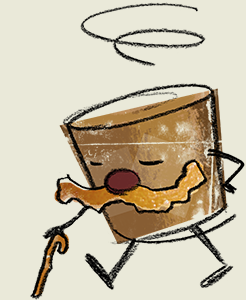 The Old Fashioned is essentially The Original Cocktail, with roots going back to the mid 1700s at least. Back in the day, it could’ve been any kind of booze (in Wisconsin, they still do this one with brandy). Bourbon respects the drink’s established Kentucky roots. Rye gives it a little extra kickiness.

Bitters are what makes this drink. Research into their history by David Wondrich and Brad Thomas Parsons indicates the first known bitters were patented in London in 1712 as a cure-all tonic to help settle the stomach. Roots, barks, spices, dried fruit peel, flowers, and just about anything else was fair game to be tossed in the pot along with grain spirit (to extract their essential compounds). These bitters would be combined with white wine or brandy, often taken as a hangover cure. Around 1750 or so, someone came up with the idea of adding a bit of sugar and water to make the mix more palatable. As these things tend to go, this combination spread to Colonial America as not just a healthy quaff, but a recreational delight. The word “cocktail” was first used in print in by the Hudson, New York newspaper The Balance, and Columbian Repository in 1806 to describe this trendy little number as such:

“Cock tail, then is a stimulating liquor, composed of spirits of any kind, sugar, water and bitters it is vulgarly called a bittered sling, and is supposed to be an excellent electioneering potion inasmuch as it renders the heart stout and bold, at the same time that it fuddles the head. It is said also, to be of great use to a democratic candidate: because, a person having swallowed a glass of it, is ready to swallow any thing else.”

All drinks using this template were called “Cocktail” for years and years. It would’ve been “Rum Cocktail” or “Brandy Cocktail” or “Whiskey Cocktail.” As the 19th century marched along and all kinds of new drinks emerged with unique identifying names (Martinez, Manhattan, Martini), people came to ask for this original version as the “Old Fashioned” cocktail. The bar at the Pendennis Club in Louisville, Kentucky helped standardize this name and recipe – specifying bourbon as the preferred spirit. As the century turned and Prohibition restricted access to “the good stuff,” people took to adding all kinds of adulterants to make the drink less awful: muddled oranges, cherries, lemons – even pineapple and mint on occasion. A drowning in seltzer was the final disgrace. And wouldn’t you know it, that formula stuck all the way through the next turn of the century, when people got their hands on copies of old 19th-century recipe books that called for the original, simple style of spirit, sugar, water (as ice) and bitters – with just a little hit of orange oil that perfectly unifies the caramel and vanilla of the bourbon with the holiday spices of the bitters.

Using a vegetable peeler or a sharp knife, cut a strip of orange peel to make:

Don’t include too much of the bitter white pith, if any. Holding the twist with the outside facing down over an Old Fashioned glass, pinch to express orange oil into the glass. Reserve the twist for a garnish. Into the glass, add:

Add an ice rock or two to three ice cubes then add:

Stir briskly to blend and chill. Insert the orange twist as a garnish.

Some people like an additional orange wheel and cherry garnish, some say all that does is take away from the whiskey. As you like it.