Suburban bourbon: the kind of stuff you’re likely to find at your local grocery store, Mom & Pop liquor store, or wherever you’re forced to buy if you live in one of the nineteen control states. While I’ll always recommend tracking down the better stuff – even if it means mail-order – I know that’s just not practical or realistic for most. So, with that in mind, I sat down recently with four friends and conducted a blind tasting of what I’ve determined are the four most common “suburban bourbons” available. I served half-ounce portions, each loosened up with a half-eyedropper of cold water. We observed, then nosed, then tasted the spirits, writing down our candid impressions. After going through them once, we tasted each one again to see if anything else jumped out. The results surprised all of us….

(around $20)
New to market this year, Wild Turkey 81 is starting to make its way onto shelves alongside the original 101-proof expression. You’ll see the 101 everywhere – but to be fair to the other bourbons we tasted, I included this new 81-proof. Wild Turkey uses a higher-than-normal percentage of rye grain in its mash bill (in order for bourbon to qualify as “bourbon,” it must use at least 51% corn in its grain-mash recipe; The other 49% is up to the distiller). Not as much rye as Bulleit uses, but still more than most. We smelled light floral, sweet notes, almost like cotton candy. We tasted salted hazelnut, black pepper, butterscotch – but all very subdued and balanced. This was the least sweet of all the bourbons we tasted, even verging on salty or savory to some of us. The mouthfeel was smooth and easy. Going back through and tasting them all again at the end, Wild Turkey 81 came out the overall favorite.

(around $21)
Maker’s Mark positions itself as a small-batch bourbon, but they’re easily the biggest small-batch on the shelf. Its unusual mash bill contains no rye, opting instead for red winter wheat and malted barley. These provide a smoothness that helps counter its 90-proof bottling. What was once our house bourbon got a bit of a trumping in our blind test, although the results were split. On the nose, we got heavy vanilla, orange oil, cinnamon, and wet hay. The higher proof overwhelmed the palate for some, only tasting offensive, fiery, rubbing-alcohol dryness. Others tasted oak, brown sugar, toffee, and cereal. The mouthfeel was thick and strong, with a long finish. Due to the split opinion, Maker’s Mark ranked second.

(around $9)
Evan Williams is produced by Heaven Hill, makers of Elijah Craig and Old Fitzgerald, among others. They use a high amount of corn in their mash (78%) with lesser amounts of rye and malted barley. Without even knowing this as we sipped, the corn really dominated the nose and taste for us. We smelled corn syrup, brown sugar, asphalt, and plastic. The taste was just plain weird: we got corn fritters, sweet tea, gasoline, licorice, and wet, oily smoke. There may be a reason its initials are “EW.” Evan Williams finished low and strange with a thin finish and a bit of heat from its 86-proof weight. Third place, and only because the fourth-place finisher was so weak.

(around $13)
The world’s best-selling bourbon, Jim Beam is made by the same company that produces Knob Creek, Booker’s, Baker’s, and Basil Hayden’s – all fine small-batch whiskies. Its mash bill is high in corn with rye and malted barley. Somehow it seems like they save the dregs from their smaller offerings and mix them all together for the masses. This was the least assertive of all the bourbons we tasted (and, at 80 proof, the lightest). The light straw color, lighter than the others which tended toward rich amber, was echoed by its barely-there nose: caramel, peach, honey, and medicine. What taste we were able to draw from it tended toward sawdust, straw, plastic, almond – but so faint, it took us a while to find these flavors. Only recommended for people who don’t like bourbon.

THE BASICS: BUILD AS YOU GO

THE NOT-SO-BASICS: TAKE YOUR TIME 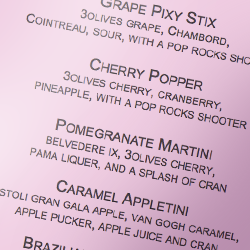 Face it: you can’t control everything. There will be occasions when you’re out with friends, someone else has picked the place, they have a mediocre-at-best menu, and you’d like to have a drink with your friends but not come off like a cocktail snob. Here’s some tips to help you get a decent drink, even at mega-chain restaurants…

Oh, and always tip 20%. Yes, even if your drink sucked. Next time, you’ll know better – consider it the cost of learning.