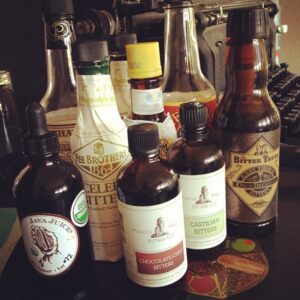 A good number of the twenty-five drinks in “Home Bar Basics (and Not-So-Basics)“ call for bitters of one kind or another. These potent, concentrated formulas emerged in the late 18th century as cure-all medicines, hangover fixes, and aphrodisiacs. It was only a matter of time before they were being added to spirits like whiskey, rum, genever, and brandy – creating the original “cocktail.” Of the hundreds available as the 19th century wound down, only two survived the 1906 Pure Food & Drug Act, then Prohibition: Angostura & Peychaud’s.

For many people new to the world of classic cocktails, bitters are one of those “what the hell is this stuff” ingredients they may be inclined to leave out – and that’s a bad idea. Maybe they’re turned off by the name, thinking they’ll be distasteful? But bitters aren’t just (or always) bitter: Stephan Berg of The Bitter Truth told me bitters are “like a spice rack for your bar.” A few short years ago, Angostura bitters were just about all one could easily find. If you were very lucky, maybe Peychaud’s bitters and orange bitters. But that’s about it. Sort of like trying to cook a gourmet meal with only salt and pepper as your accents: no basil, no cilantro, no mint, no sage… thankfully, that’s changed. We’re now faced with hundreds of bitters – from the classic to the weird: Jerry Thomas’ original recipe, Mexican Chocolate-Chili, Celery, and beyond. This confusing array may just be a passing trend, though: Berg believes “there are just a handful of bitters that will stand the test of time, once the craze is over.”

But in the meantime, bitters are being used as springboards for experimentation. Louis Anderman over at Miracle Mile Bitters says, “They’re like The Dude’s rug – they really tie the room together. Just as with seasonings in food, sometimes you want those flavors to come to the forefront, other times you want them to take a more supporting role, binding and enhancing the other ingredients.” Pro bartenders will make multiple versions of a new cocktail, trying out different bitters to enhance or contrast the flavors in the glass. Or they’ll start with the bitters – tasting a few drops neat or diluted in water, and get inspired to pair flavors around the bitters – often employing dozens of options at their bars.

Exploring bitters is affordable and practical: bottles will last, unrefrigerated, for decades. Pick up a bottle of whatever grabs your interest and try a few drops dashed onto the back of your hand. Think about what spirits might go well with their flavor, then consider where the balance will come from – sweet, tart, or otherwise. Angostura tastes like cinnamon and holiday spices, Peychaud’s tastes like cherry and floral vanilla – but both are far more complex than just that. For the basics, it’s a must to have the big three on hand: Angostura, Peychaud’s, and Regan’s Orange Bitters #6. For the not-so-basics, it can be fun to explore bitters one bottle at a time: try Miracle Mile Bergamot Bitters in a Martini, The Bitter Truth Jerry Thomas’ Own Decanter Bitters in a Martinez, or Fee Brothers Celery Bitters in a Bloody Mary. Once you start thinking about these accents and their role in a cocktail, you’ll find other non-traditional elements can work like bitters. Recently Java Juice, maker of USDA organic coffee extract marketed to backpackers, hit upon the idea of using a few drops of their potent elixir as a cocktail accent – an idea I was all too happy to jump on with my “Little Achiever” cocktail. If you’re interested in learning more about the world of bitters, their history, and their application, check out Brad Thomas Parsons’ book “Bitters” – a great read.

The Bitter Truth products are available online at DrinkUpNY, at Cask, and in your local liquor store (if you’re lucky enough to have a good one)
Miracle Mile Bitters are available at retail (and online, where linked) at Bar Keeper in Silverlake, at K&L Wines in Hollywood & San Fernando, at The Wine House in West LA, at The Meadow in Portland, OR and New York City, NY, and at Cask in San Francisco.
Java Juice is available online at Java Juice.

One Response to BITTERS: YOUR BAR’S SPICE RACK

This site uses Akismet to reduce spam. Learn how your comment data is processed.